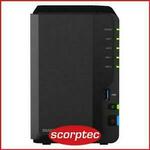 Seems like a relatively cheap price… is the lowest I've seen recently anyway.