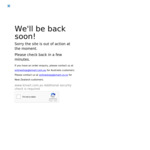 90% discount! Seen at Launceston store, plenty of stock available (pic was taken near the cash registers). Handy for that next Zoom or Teams call and you’re stuck using a computer with no built-in mic.