OzBargain Treasure Hunt 2021 Has Finished! See this comment on what to do if you have won a prize.

OzBargain Treasure Hunt is Back! For those who have done it before — you know the drill. TL;DR

For those who aren't familiar with the OzBargain Treasure Hunt, it's a site-wide event that we run (almost) every year since 2015. The format hasn't really changed much, so here is just the instruction from last year's hunt. Basically various prizes will pop up on the site throughout the day during the hunt. You'll need to do a bit of scrolling as they pops up in the middle of the page. Here's an example: 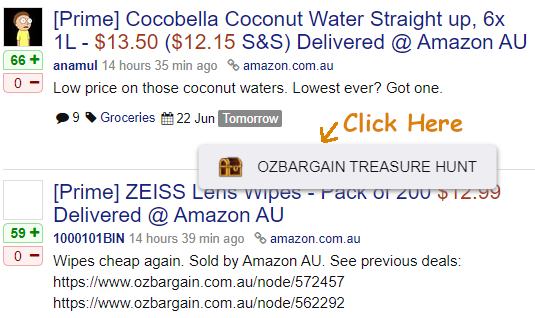 There are quite a few factors that determine whether a prize pops up on the current page or not.

When a prize pops up on a page, it won't stay there forever. The "Click to Reveal" banner will disappear after 20 seconds without interaction. However after you click on the prize, it will reveal what the prize is and allow you to claim it. 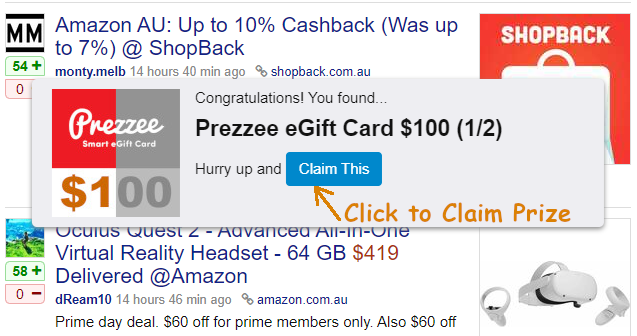 After you have claimed the prize, it will be added to your inventory, which is available on the Marketplace page (that page will be enabled 2 hours before the hunt starts). Marketplace would be very important in the later part of the hunt. You can add at most 4 items to your inventory — prizes basically would stop popping up on OzBargain once your inventory is full. 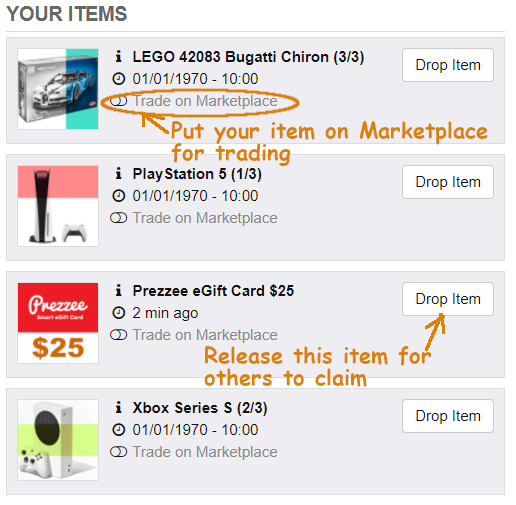 On the Marketplace page, you can

Trading is important because many prizes come in multiple parts — and you can only claim the final prize when you have collected all the parts!

Feel free to use private messages or this forum to organise trades.

Here is a list of prizes for the OzBargain Treasure Hunt 2021. There will be lots of Prezzee Gift Cards where you can exchange with merchants' gift cards to be spent online or instore. There will also be some OzBargain T-shirts from last year's competition. Moreover there are also OzBargain hoodies to be won — collect them all to complete your OzBargain lifestyle.

Finally the grand prizes — OzBargain will be giving away some Next Gen game consoles, i.e. Sony PlayStation 5 (disc and digital edition), Xbox Series X and Xbox Series S. Do note that for PS5 and XSX — I might not be able to deliver those straight away, but rather a promise that OzBargain will get the winners a console sometime this year, as hunting them down at RRP can be difficult.

Since Automotive forum has been OzBargain's most popular forum with all the insurance and car accident advice requests, I thought we'll give away some car related prizes as well — Supercars — Bugatti Chiron, Lamborghini Sian and a few others. In LEGO though.

Official starting time for OzBargain EoFY 2021 Treasure Hunt is Wednesday 23 June 2021 at 12:00PM, and will conclude at Friday 25 June 2020 at 10:00AM. Most prizes will be released before the evening of Thursday 24 June, but and the extra time will allow trading to take place.

After the hunt finishes, those with prizes will be presented with a form on the Marketplace page for filling out the delivery details.

OzBargain Treasure Hunt is open to OzBargain members, and

Also any attempt of scripting / gaming the system would result your account(s) banned.

Yes, prizes will still show up when you use adblocker on OzBargain.

Yes, mobile browsers should not have any issue.

Q: Where do the prizes pop up?

Most will pop up on random pages throughout the OzBargain website.

It will always be below the fold, i.e. requiring you to scroll down at least one full page. It pops up when the page is loaded, but will disappear after 20 seconds. Whether a prize will popup on a page is governed by probability — most prizes have low probability (0.5% to 1%) of chance popping up on a page. Some prizes have high probability but will only appear on specific pages. Please see "Timeline" above for those scheduled drops and hints on their locations.

Q: I am getting error "This item has already been claimed" when I try to click on Claim This button! What's going on?

A prize can simultaneously pop up on many ozbargainers' browsers, but only the first person clicking on "Claim This" will actually add the prize to his/her inventory. Others will get the error message after clicking on "Claim This" button. It's like multiple people can simultaneous spot a $50 notes on the floor, but only the first person who takes the action to pick it up can claim it.