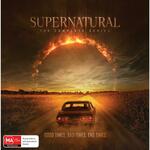 Supernatural finished after 15 seasons, and the complete box set was released earlier this year.

Normally priced around $300 in local stores, and even though JB HiFi claims a ticket price of $199, I’ve never seen it at that, and with the extra 20% off, $159 is way less than elsewhere.

Amazon (via AmazonUK) has the 58 BluRay disk version for about $260, but JB doesn’t stock it.

Niche product for sure, but awesome deal if someone you know has it top of her Xmas list…