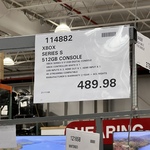 Costco Docklands have the Xbox Series S available for a slight discount currently.
It’s not the cheapest price it’s been in the past, but coming into Xmas some people maybe looking for some savings.

The differences between Xbox Series S and Series X are:

Tips:
1. Bundle this with Xbox Game Pass to get access to a huge library of games for $15.95 a month (or ~$4.50 a month with deals/hacks posted on OzBargain)
2. You can expand the ultra fast ssd storage through the official Microsoft/Seagate expansion cards. These are not typically cheap, but they have come up for sale in the past.
3. You can connect external USB drives to use as game storage but please note:

Games that can be STORED on external USB Storage

Overall I think its a great console if you only intend to game on a 1080p TV and are happy with digital game downloads via Xbox Game Pass or through the XBOX store.