This was posted 7 years 1 month 12 days ago, and might be an out-dated deal. 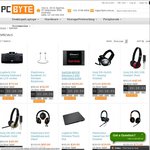 PC Byte is more than just flash memory and for the next 24 hours, we're clearing out a whole smorgasboard of computer peripherals especially headphones. DL Envelope shipping for small items is free (but please note this does not come with any tracking and registered post is recommended.) Postage for larger items dependent on weight and customer location and calculated at checkout (generally $7-12 in Sydney, $10-15 everywhere else.) Free Pickup is available. Strictly while stocks last. Feel free to drop me a message below if you have any questions!

Others
Logitech T650 Wireless Touchpad for $20.