This was posted 7 years 2 months 5 days ago, and might be an out-dated deal. 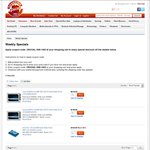 This massive discounted price is an ozbargain exclusive deal with special support from our Vendor (valid for the next 2 days).
In Stock, same day dispatch for orders before 1:pm AEST. (Unexpected downtime from our system today causes slight delay for same day dispatch cut-off time - apologize for those order between 12-1pm AEST)
This is Australia Stock with Full Manufacturer's Warranty
Enjoy Everyone.

Use coupon code: OI-OI-OI in your shopping cart before checkout to enjoy discounted SSD prices below

All stocks are limited, with limited quantity per customer.
Where free shipping do not apply, shipping starts $8.95 and averages $12 Australia Wide.
No Grey Imports, All Genuine & carries Australia's Manufacturer Warranty.

For 1st time buyers:
- Add any of the above products to your shopping cart
- Enter Postcode inside your shopping cart and click apply
- Enter voucher code: OI-OI-OI and the associated discount will apply (check right side of the shopping cart for the total value
- Proceed to checkout and make payment once you confirmed the total price is correct