This was posted 6 years 12 days ago, and might be an out-dated deal. 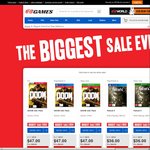 Hey guys, first post so let's see how I go!

I just saw that EB currently has the Doom UAC Edition for $47. Previously (to the point of even being this morning from memory) their sale price was $77. They still have it for $77 for the preowned copies, but this awesome price for new.