This was posted 4 years 3 months 6 days ago, and might be an out-dated deal. 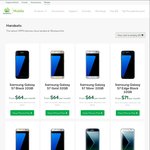 Please note your upfront payment will be $80 and the first discount will appear as a credit on your first bill.

Hi all - just to clarify for everyone. These 2 codes are valid. They were set up to assist people who had issues ordering during the sale last week. The fact they've been posted online is not a problem - we're not going to deny anyone the sale price if they use either of the codes.
Please note - during the checkout process it will still show the full cost, however on Monday 22/8, the handset price will be changed to the lower sale price for anyone who has placed an order and used either of the codes - ie, to $9 on the M plan and $5 on the L plan. You will then be sent an SMS to confirm the monthly handset price has been changed.

The referrer and referee will both receive a $10 WISH eGift Card. Referral codes can only be shared after 90 days of service and gift cards sent only after staying for at least 3 active months. Maximum of 5 referrals per year. Once referred customer activates on Woolworths Mobile, they must download the Woolworths Mobile App, and enter the eligible referral code within 30 days by selecting “Refer a friend” from the slide out menu.