This was posted 4 years 6 months 29 days ago, and might be an out-dated deal.

$100 off a single Coles Supermarket shop if you apply and are approved by 28 February 2017, and make a purchase in the first 30 days

Receive free delivery each time you spend $100 or more, after savings and discounts, with a Coles Credit Card at shop.coles.com.au. Offer can be withdrawn at any time. Offer excludes tobacco and tobacco related product purchases and remote delivery orders 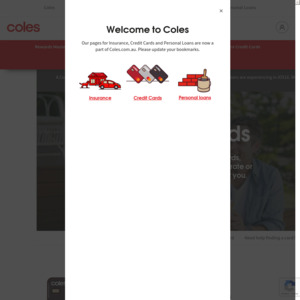