This was posted 4 years 9 months 21 days ago, and might be an out-dated deal. 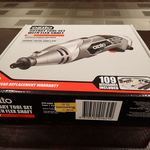 Saw this in Vermont South Bunnings in the tool shop. Had around 25 units marked down to $25.

The guy at the desk confirmed this accepts Dremel bits.

Similar units from Dremel and Ryobi are over $100, in most cases with fewer accessories.

This is a great deal for someone looking for a decent tool who doesn’t want to spend more than a $100. Comes with a 3 year replacement warranty.