This was posted 4 years 10 months 4 days ago, and might be an out-dated deal. 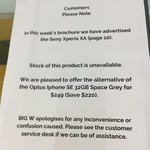 I went to buy an iPhone SE for a friend. Was going for unlocked but she was already with Optus saw this on the counter.
This was BigW in WA so may not be National

Mod: The offer is only available at the stores below where the Sony Xperia XA is NOT available for purchase.

Mod 12pm: It's highly unlikely stores will have any stock remaining.