This was posted 3 years 7 months 4 days ago, and might be an out-dated deal. 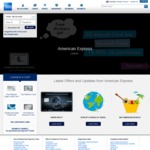 Just rang AMEX earlier about something completely different and they told me about this current promotion.
Receive 5k points when adding a supplementary card holder to an AMEX issued card.
You can only receive the points once per card regardless of how many cards you add during the promotion.
Doesn't seem to be advertised but I was told the promotion just began and runs until the end of September.

This would not apply to bank issued AMEX cards

It seems they ran this deal a similar time last year
https://www.ozbargain.com.au/node/272208