This was posted 2 years 5 months 3 days ago, and might be an out-dated deal. 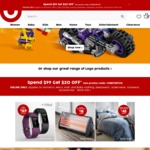 This is instore only. Head straight to Layby or the entertainment counter to place your preorder. Only a deposit is required until the stock arrives. 1 per person.

Looks like only 2 stores per state:
Thanks to toppergoofy