This was posted 4 years 22 days ago, and might be an out-dated deal. 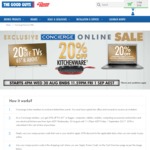 Better than 20% from their eBay because the prices haven't been jacked!

Unique codes required, I'm sure OzB members will share theirs if not being used. My two already been used.