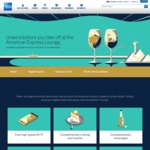 Long-running deal, last post was more than 6 months ago, and prior to that, 2 years 7 months ago. Complies with deal posting guidelines.

Posting for the benefit of eligible Amex Card holders (hopefully most OzBargainers) looking to relax in a lounge, away from the crowded airport terminals.

I am in Melbourne and also don't have any of the eligible Cards, so have not taken advantage of this offer, but will be applying for an Explorer and if the rumours are true, will be visiting Melbourne airport's lounge later this year/early next year.

Edit 27 March 2018
The Melbourne AmEx lounge is now officially open. Reports are it is bigger than the Sydney one, and is a welcome addition to the bore that is MEL airport.