This was posted 3 years 6 months 19 days ago, and might be an out-dated deal.

This has been shared on OzB before but not for a while (from what I can see). I've been using Transferwise for a while now to transfer funds from AUD to USD and vice versa. I used to live in the States and currently use it to send AUD funds to my US account. It's definitely the cheapest and easiest way I've found to do it. They use the rate you see on XE or Google and then charge a small fee. Use a referral link to get your first transfer up to £500 (or approx. $926AUD as of 12.10.2018) with no fee. Thanks!

Referrer receives £50 for every 3 signups and/or £15 . Referee receives one free transfer. 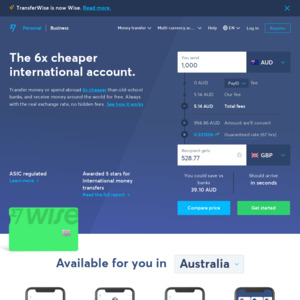