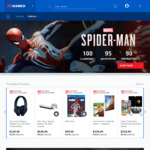 Bought Spidey at EB today and the staff told me about a new policy they're having.

Basically you can trade in any game into EB as normal, but EB will let you buy it back at any time (weeks, months, years later) for the same price you traded it in for, or lower if it’s on sale. It's linked to your EB world account, so you need to be one for this to apply.