This was posted 2 years 6 months 3 days ago, and might be an out-dated deal. 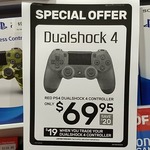 I don't have a screenshot of the deal which was in store but the offer still stands until the end of this month as I've asked the store retailers.

I traded in my white ps4 v1 controller i've been using since 2014, left thumbstick rubber is all worn out but still acceptable and got myself a new V2 red controller for only $20

Offer only spotted in Keysborough's EB Game in Parkmore so i wouldn't know about other EB retailers.

Perfect if you have been using your controller for so long and it's worn out. Even more better if you're looking to upgrade from V1 to V2

Thanks to sarakoth for the picture.

Mod Update 14/10: Appears to still be available at selected stores