This was posted 2 years 9 months 13 days ago, and might be an out-dated deal. 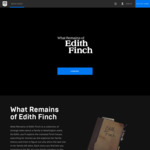 From the same store that gave away Subnautica and Super Meat Boy for free comes the next free game (announced).

What Remains of Edith Finch is a walking simulator from developer Giant Sparrow that came out in 2017. It features the titular Edith Finch as she walks through her family’s home and encounters their stories that you play through. What Remains of Edith Finch was praised for its inventive and mechanically infused storytelling that told a heart-wrenching tale of one unlucky family. It originally came out on Steam and PS4 in April 2017 only to come to Xbox One three months later.

Note - this game is free from January 10 and available till January 25.

You can still get Super Meat Boy for free till January 10.