This was posted 2 years 8 months 16 days ago, and might be an out-dated deal. 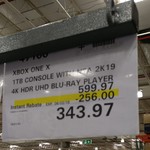 After TGG ebay fiasco walking through costco (docklands) today was pleasantly surprised to see this.

There seemed to be an issue with the bundle and code. Was a bit of a drama but I think it was caused by the NBA part so ive excluded that from the deal title even though its in the pic.

Going by comments, this is unlikely to be in stock at Auburn (NSW) and is out of stock in Docklands (VIC)

This deal is not obtainable at North Lakes [QLD] and not in stock in Adelaide.

Xbox One X
by Microsoft