This was posted 2 years 10 months 4 days ago, and might be an out-dated deal. 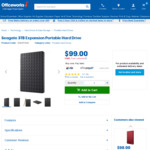 This Seagate Expansion Portable Hard Drive is perfect for backing up your important files and taking them on the go. It comes ready to go so you can start copying and organising your important documents, photos, videos, music and other files right away.
The hard drive has a compact design so you can easily carry it on the go.
The large 3 TB capacity provides plenty of room for your important files.
The hard drive connects to your computer via USB 3.0 and is backwards compatible with USB 2.0.
It's powered by the connection to your computer so you don't have to worry about extra power or adaptors.
It comes ready to go with the Windows operating system so you don't have to worry about installing extra software.
This hard drive comes with a 3 year warranty for added peace of mind.