This was posted 2 years 1 month 13 days ago, and might be an out-dated deal. 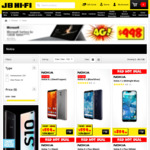 Credit to AusDroid for this deal:

HMD Global have announced that their entire range of smartphone and feature phones are 20% off the retail pricing at JB Hi-Fi tomorrow (Wednesday 28th March) until this Sunday, March 31st.

Nokia have become a firm favourite within the Ausdroid office and with readers, mostly due to the Android One and Android Go as their software. When HMD announced this discount we thought it was too good to miss.

If dual SIM is important, I'd check before purchasing.

Disappointed that Nokia 9 with 5 cameras on rear hasn't been released.