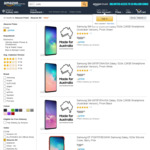 Greetings everyone, Amazon have got into the price war game and have dropped the pricing on this popular phone!

All 3 colours available on time of posting, 5% price beat available at Officeworks or further cashback available also at Amazon.

These are full Australia stock with 24 months warranty.

5.8" Full HD+ Infinity-O display for an immersive movie viewing experience
Dual camera with new Ultra wide lens for professional-grade photos.
The 3, 100 mAh battery is powerful enough to charge other devices.
Intelligent battery management allows you to live more and charge less.
Made for Australia. Certified Samsung Electronics Australia products give you the performance, features and coverage you expect.