This was posted 1 year 6 months 21 days ago, and might be an out-dated deal. 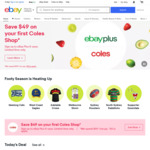 Conditions. The offer entitles you to 10% off the purchase price (excluding postage costs) on all Eligible Items listed on www.ebay.com.au, when you spend $100 or more, up to a maximum discount of $500 per transaction. Multiple items may be purchased in five transactions (up to a maximum of 10 items per transaction). All monetary amounts specified in these terms and conditions are in Australian dollars (AUD).

‘Eligible Items’ means all items listed on eBay.com.au where these terms and conditions are found and the coupon redemption code PADDLE is displayed in the item listing.