This was posted 2 years 6 days ago, and might be an out-dated deal. 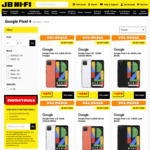 Another contender for your pre-order. $150 in gift cards also available at Harvey Norman & Google Store.

Coupon Terms (thanks to kerfuffle)
Coupon redeemable until 30/03/2020. Maximum $150 discount is calculated off the current ticket or promotional price. Coupon redeemable on purchases excluding Telstra & Foxtel Services, Miele & Asko, Dell & Apple Built To Order, Prepaid Cards & Gift Cards, Pre-Orders, Extended Warranties & Delivery. Coupon redeemable at a JB Hi-Fi Australia stores as a single transaction only. Coupon can only be used once and must be surrendered upon use. Cannot be used in conjunction with any other coupon. Balance is not transferable or redeemable for cash. Coupon offer not available at JB Hi-Fi Airport located stores.