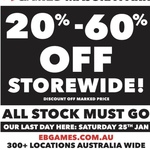 EB Games have emailed EB World members to advise of individual store closures, with 20-60% off the marked price of items storewide at those stores only. Thanks to @apsdogg for this photo of the discount categories

Thanks to everyone who has mentioned stores closing near them - I initially posted as Majura Park only,

Not sure what current stock levels are, so no specific deals to highlight at this stage.