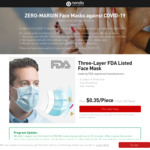 For existing nonda accounts only.

Total cost for 200 masks is about AUD $191. Face mask is a valuable commodity these days with hand soap and toilet paper. Shipping sorts of making the deal less attractive but it is still competitive in the market. And the good will from the business should be appreciated.

In light of the COVID-19 pandemic, face masks became an essential but expensive commodity.

So, nonda acted immediately to make our community members safer. Our actions are:

On behalf of nonda users, we will purchase face masks directly from FDA registered manufacturers in China. The purchase cost now is ~$0.35/piece. (The same mask sells at $1.99/piece at Fry's).
We've negotiated a special 76% discount from DHL for nonda users.

These are how nonda wants to help our community to fight COVID-19.