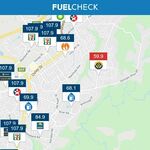 When the servos end up stopping their long weekend price gouging, you know that the situation is serious…

Get in before the US military calls in an airstrike over Campbelltown to raid their vast petroleum stocks.