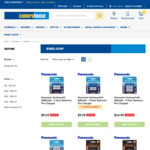 Camera House is waiving shipping fee, and OzBargain favourite Eneloops are on sale:

Tile Mates and Command Hooks are also on clearance: