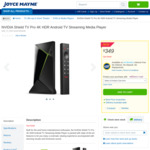 Shield Pro. $349 plus delivery.
Not really a bargain - but with the Shield Pro selling at up to 20% above on eBay and all stockists charging up around $399 its better value than elsewhere.

Dollar has been smashed, and there is limited stock of these currently from China. Spoke to MWave and Computer Alliance and both said stock was limited.