The Whopper Is The Most Overrated, Boring Burger

Let's talk about Hungry Jack's Whopper for a second.
Originally I titled it "The Whopper Is a Burger Which Does Nothing Wrong, but Nothing Right Either" but felt that was too wordy lol

It's been their signature burger they take such pride in for a long time. However, it's nothing special. It's just a glorified cheeseburger.

This will probably come off extremely pretentious but while eating a Whopper I feel myself getting quickly bored with it. It doesn't taste much like anything or whatever taste it originally has gets dulled quite quickly.

I haven't tried the Big Jack and one part of me really wants to because I feel they might outdo Maccas there. Although the burgers have definitely slipped in quality from Hungry Jack's - don't know whether it's just the few stores I've visited but meat tastes old, bland and hardly warmed. Buns taste one day off going stale. Sauce is normally the saving grace, although sometimes there's not even much taste of that.

If the Big Jack doesn't live up to the hype either, what burgers have Hungry Jack's got left really to compete?

I actually really enjoyed the BBQ Pineapple Whopper from Hungry Jack's previously. Maybe that's why I had high expectations for the standard Whopper. Doesn't look like I can add pineapple though so that's a shame.

Also a double whopper with bacon and cheese just for the burger is over $10? That's without things added like beetroot or angry onions.
I don't know if the Ozbargainer in me will allow me to spend $10 on just a fast food burger.

I see on the coupons 2 Whoppers for $9.45 but not sure who'd eat the second one and idk if you can do add ingredients on vouchers and still get the reduced price

For anyone still following this, I tried a Whopper (with Cheese and Bacon) from a different store. Was a lot better but I don't think that was the issue. I could actually see the meat was flame grilled and it tasted like that too compared to those previous which were tasteless.
Note I never compared the Whopper to the Big Mac, I was wondering the quality of the Big Jack to the Big Mac. Somehow I feel a simple cheeseburger gets the job done nicely at Maccas rather than Hungry Jack's but the problem with Maccas is the size. At least the Whopper is more decently sized.

Would I buy one again? Yes, but only if I spun a $4 Whopper on shake and win and didn't go to the first store I tried. 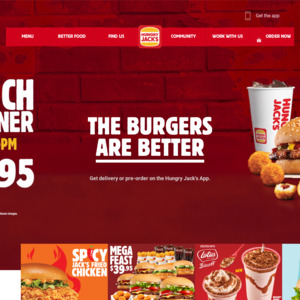