We still have a launch promo special for our fellow Ozbarginers - OZBARGAIN50 ($50 OFF). This coupon can also be used for all other brands on our website!
We offer free shipping to selected Metro cities, if you're unsure, please message us and we can confirm the delivery. :)

Mitsubishi Heavy Industries is also doing a cashback promotion at the moment as well. For example by using the $50 off code on our website:

Please feel free to use our interactive air conditioner buying guide on selecting the right system for your room (please also consult with your qualified installer).
If you're looking for a other models of Air Conditioner, please feel free to message us and we can help source it for you (we're in the process of adding LG split systems onto our website as well). 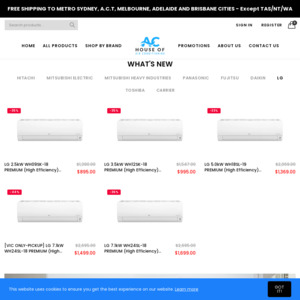