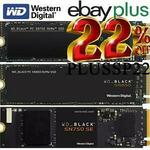 Two different WD_Black SSDs on sale with both the original Gen3 SN750 and the newer Gen4 SN750 SE. I've included a comparison between the two SSDs in the table below. The SN750 is using TLC flash, while the SN750 SE is suspected of using TLC flash as well but I've been unable to confirm.

In regards to PS5 compatibility, Digital Foundry did a test on the SN750 SE since it's Gen4 and found that it does work. You can see the results here.