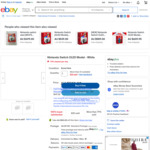 A repeat of this deal, with a different coupon code.

Nintendo Switch OLED Model (White) for $489 + delivery (free delivery for eBay Plus members). Not the lowest price it has been (thanks Klarna), but decent if you want to pick one up right now and don't want to pay RRP.

Last I checked, only the White colour seems to be in stock.

Also applicable on EB Games' eBay Listing, with a delivery fee of $6.95.