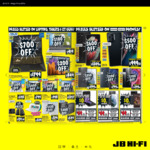 Saw this in the catalogue that starts tomorrow. Saving around $1000.

Important to note that the plan contract is for 24 months. Also, this excludes existing Telstra, Belong and Boost customers.