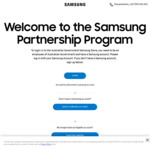 Samsung QLED TV's Quantum Dot technology delivers a world of immersive colours and contrast in a variety of lighting conditions - allowing you to discover details you haven’t before.

***This does also stack with the $50 Newsletter Voucher, so the final price could come down to $2,449 Inc Delivery.