This was posted 9 years 9 months 23 days ago, and might be an out-dated deal.

Use it to clean up your itunes library
Usually 15-20% off promotion, but never seen it for 50% off … just what I was waiting for.
Cheapest I have seen it!

I just bought the lifetime bundle 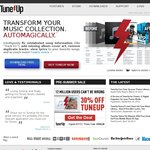