This was posted 7 years 8 months 14 days ago, and might be an out-dated deal. 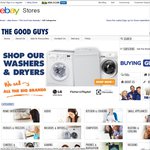 30% OFF THE GOOD GUYS ON EBAY http://stores.ebay.com.au/The-Good-Guys-Australia

Ensure to apply the discount at the right spot:

ps. I see a XBox One in Gaming, Premium Rice cookers, Nespresso Machines, Wireless Headphones and many other tempting things…

Don't forget to use the Velocity Rewards Points, to earn 4 Velocity points on every $1 spent.

MOD: eBay has notified us at ~2:56PM that "2,500 redemption have been reached and that the offer is no longer available".