This was posted 7 years 4 months ago, and might be an out-dated deal. 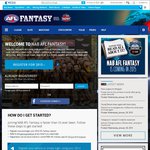 The first 10,000 league commissioners that create a Full League prior to 2nd March 2015 will receive a 2015 AFL Live Pass for the length of the premiership season right up until the end of November, valued at $67.28. Prizes Page
Ensure you create a classic league, not an elite league

There are no further details that I have found that tell you when/how the subscription will be sent to you.

Once a league is created, as the owner you can add 10 celebrity players automatically, thus only needing 5 other 'real' players (apart from yourself) to fill the league.

Thanks to GaelicAU this is how to add celebrity teams:

Here's the link to the important part of the image from the email.
http://tds-email.s3-ap-southeast-2.amazonaws.com/afl/launch2...

(tidied up midday 29/1 for clarity - as of editing, there are 4300 clicks through to the Fantasy site and 6300 comments here.. so likely easily half of the 10,000 leagues and subsequently at least half of the 10,000 passes on offer are gone or close to it! Get cracking on filling you league if it's not already full.)