This was posted 6 years 8 months 12 days ago, and might be an out-dated deal. 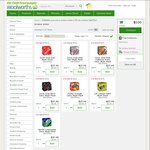 Note there is a $30 minimum for online orders (you will need to add more items to your cart in this case). If the system only allows you to add 2 codes: You will need for link your EDR card to your account. You may also need to increase the quantity of your order then decrease it once the codes are added.