This was posted 4 years 10 months 24 days ago, and might be an out-dated deal. 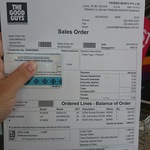 Edit
Thanks to SirFlibbled for calling TGG call centre and confirming the deal is a GO.
"If you have any problems when picking it up, they said just to call 1300 466 348 and they'll set the store straight."
His comment is somewhere in the thread below.

Firstly I just want to thanks TRENT86 for the original Dyson deal:
https://www.ozbargain.com.au/node/187532

and BTB for the original eBay discount:
https://www.ozbargain.com.au/node/187802

I realise this is almost a duplicate post but with a further 20% saving off the TGG pricing due to the eBay sale, it's worth re-posting just to get attention.

The original deal was that you can get a free DC45 Stick Vac if you purchase either the DC54 Animal Pro ($992) or DC Animal Barrel Vacuum (897) from TGG online store OR in-store.
However, I noticed people were having trouble price-matching these vacuums AND still getting the free DC45 so I contacted TGG Banksia and Auburn (although Auburn didn't have any stock for the Pro) and confirmed that you CAN do a click and collect via the eBay sale for 20% off their price AND still get the free DC45 on pick-up. I do recommend to do the pick-up and to double check with the store of your choice before making the purchase to check stock and confirm they will honour the deal. Deliveries could just be messy if someone forgets to post the DC45.

Keep in mind you MUST use the CTECH20 code and pay with PayPal.

Remember, CONFIRM WITH YOUR NOMINATED STORE FIRST to ensure they will honour the deal before making the purchase.