This was posted 6 years 4 months 24 days ago, and might be an out-dated deal. 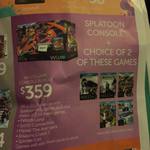 Pretty good price for a new game-and-console bundle on day one. Credit to happyman for the find.

The console comes with Splatoon (hard-bundled) plus a choice of 2 of the following:

Nintendo Wii U
by Nintendo