This was posted 12 years 4 months 26 days ago, and might be an out-dated deal. 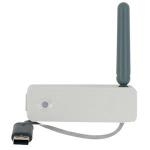 Hi Guys this is a great deal for a wireless adapter for your xbox 360 especially with the xbox arcades being so cheap these days It currently converts to $59 Aus but it may differ a couple of cents. RRP $149.95!
Extra 2% off with this coupon Code FCT2OFF

Designed for versatility and ease, the Xbox 360 wireless networking adapter enhances your Xbox 360 experience in the digital home, seamlessly synchronizing with the Xbox 360 system.
You can easily transfer videos and music to your Xbox 360 system from your media center PC, chat with your friends, play games via Xbox LIVE, and more without the clutter of wires.
Dual band 5 GHz and 2.4 GHz Wireless A/B/G home network compatible.
Compact, high-performance design.
Powered by Xbox 360 to eliminate adapter clutter.
Windows Vista media center compatible.
Streams photos and music from Microsoft Windows XP and recorded TV, movies, and videos from your Microsoft Windows XP media center - based PC.

As always its free shipping from focal price!
Also why not pick one of these $0.01 stylus/pens up