This was posted 6 years 7 months ago, and might be an out-dated deal. 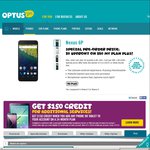 You need to cancel the plan after the first month to prevent any subsequent charges. You are not locked into any contracts.

RRP from Google playstore is $899.

Update #1: After you've recieved your order you can confirm it's been accepted here: https://www.optus.com.au/shop/welcome?defaultTab=1
Update #2: You can track your order after Optus confirm it's been sent to warehouse 'Your order has been sent to our warehouse for packaging' on startrack with optus order number: http://sttrackandtrace.startrack.com.au/
Update #3: Some users are reporting they are calling optus in advanced, and cancelling the sim service. Saving $30 :)