This was posted 4 years 6 months 20 days ago, and might be an out-dated deal. 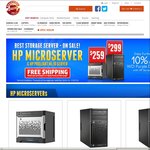 We still receive many requests for microserver deals so here it is - HP G8 G1610T @ $259, buy any 2 item in the sale and receive free shipping for your order. There's a further 10% off WD Purple drives when you buy with HP Microserver/Server.
Weak AUD makes it harder for us to come up with today's Microserver & Hard Drive pricing so please don't miss out on this one.