This was posted 2 years 10 months 3 days ago, and might be an out-dated deal. 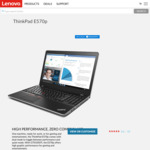 Incredible value & superb specs. Apply coupon TA-E570p-1199 at checkout to get the discount. Consider extended warranty for peace of mind as it's 30% off for this promo. Call Lenovo's telesales number on 1300 557 073 (until 6pm weekdays) with any questions. Ends 11:59pm AEST Sunday, unless sold out or withdrawn prior. Enjoy :)

Use Cashrewards for 6% cashback on this deal and everything Lenovo