Optus Double Data on My Plan Plus Mobile Phone Plans 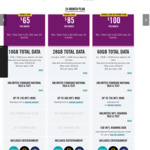 if you're wondering what is Optus doing offering all these high amount of data, here's theory