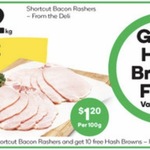 Cheap bacon and free hash browns. Fry them both in butter and smother with sauce. Delicious.

All half price specials here thanks to Savas.