This was posted 2 years 4 months 2 days ago, and might be an out-dated deal. 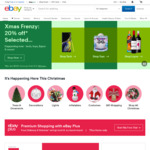 10% off the purchase price on all eligible items (except exclusions listed) when you spend $120 or more in one transaction, up to a maximum discount of $300. A maximum of two transactions applies. Multiple items may be purchased in one transaction (10 items maximum).

Click the related button above to see all PROPER10 deals.